Hi there!
This week I'm going to show you how to make this Schneeky Schnake. He's hiding, in camouflage against my red curtains at the moment. 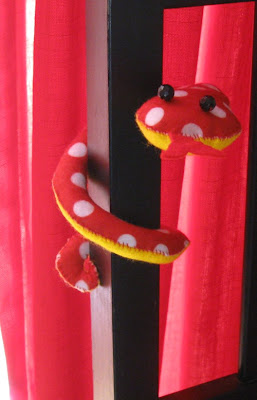 You can see him a bit better here. He likes to hide and climb so it took a while to get him to keep still! 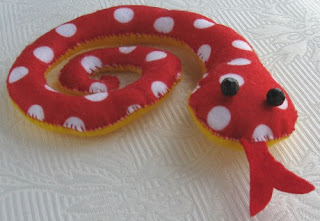 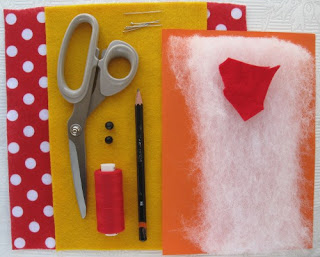 Step 1.
Body parts.
Draw a snakey looking spiral on your paper like mine below, it's about 10cm by 15cmish. Start in the centre and work your way out. Draw a round head shape on the end. It doesn't have to be exactly like mine, just make sure you don't make the lines too close together, it'll be hard to sew if they're close together.
Draw a forked tongue too, like a bubble-writing letter Y. 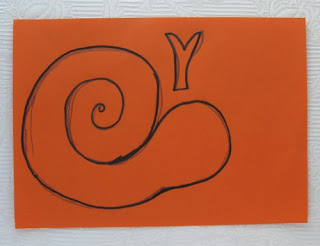 Cut around the outside of the spiral shape and the tongue. 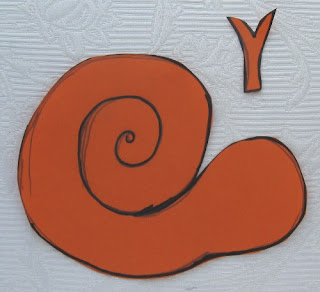 Put one piece of your coloured felt on top of the other to make two layers. If you are using patterned felt, make sure the pattern is on the outside so you can see it. Pin the spiral to the two layers of coloured felt, use quite a few pins.
Pin the tongue shape to the scrap of red felt and cut it out. 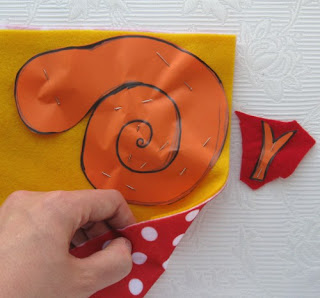 When you cut out the spiral, cut along all of the lines round and round in to the middle of the spiral. 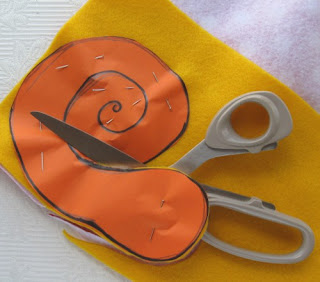 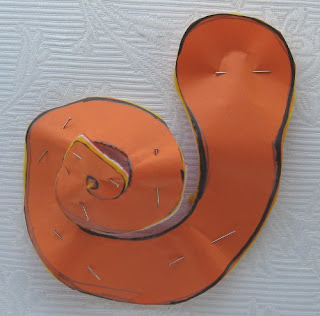 Take out the pins and put the paper to one side, you could use it again later to make another schnake. I have a folder full of paper patterns that I might use again!
Replace the pins through the two layers of schnake like this: 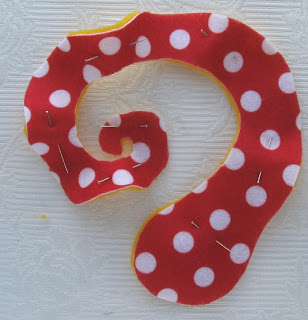 Step 2.
Details.
Decide which side of the schnake is going to be the belly and which will be the top. I went for a spotty top and a yellow belly, he's not a scaredy schnake though! He's brave and adventurous.
Sew the beads on to the top side of the head, hiding the knots on the inside. He looks happy to see us! 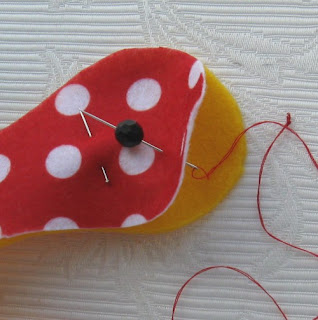 Sandwich the end of the tongue in between the two layers and put a pin through to hold it still. 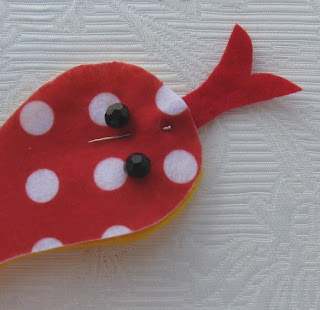 Step 4.
Sewing up.
Start near the head on the inside of the spiral's curve, hiding the knot in between the two layers. Use doubled thread and over stitch to sew around towards the tongue. 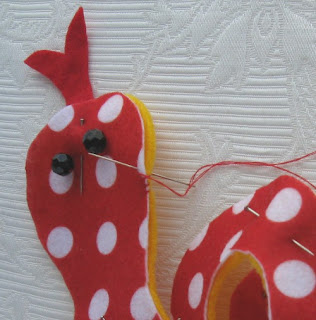 When you get to the tongue, go through it like in the picture below.
Carry on sewing around the schnake's edge until you get to the tail. This might take a while, it's good if you have a friend to chat to while you sew, maybe you could show your friend what to do so they can make one too! 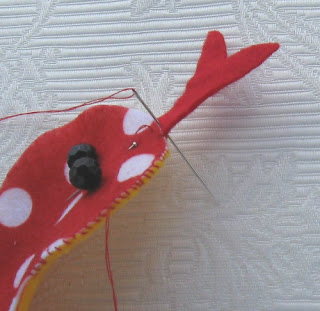 Step 5.
Stuffing.
When you get to the tail with your stitches, keep going around the pointed end of his tail but stop after about 1cm. Get a tiny pinch of stuffing and using a pencil poke it in to the end of his tail. 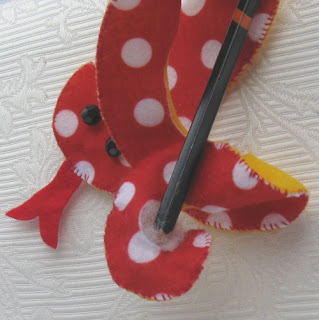 Poke it right in there. 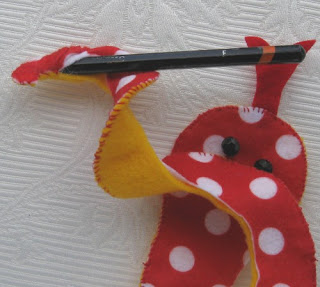 Then sew a little further, for about 1cm more, still using over stitch. 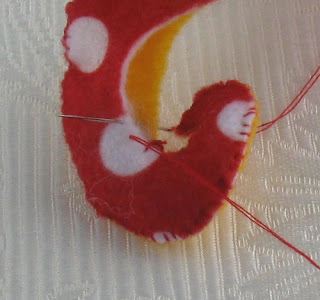 Stop sewing and stuff a bit more stuffing in using your pencil. 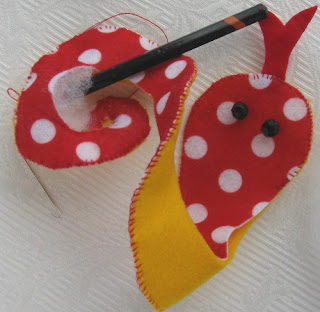 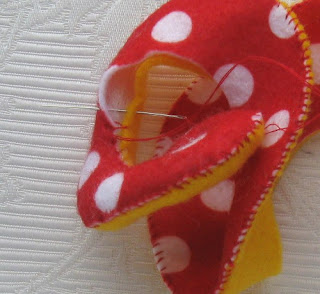 Don't sew up the hole until you've stuffed the head! Finish off with a knot, make it as small as you can to hide it away. 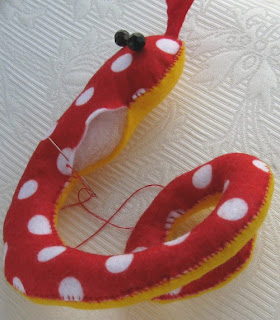 Finished! Hey Schneeky Schnake! Not so fast! Phew, caught him. 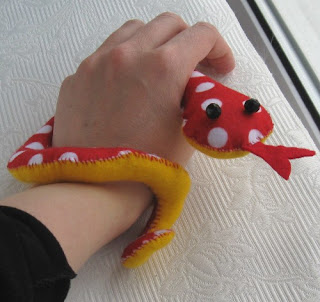 We went for a tour of the house. He liked being a necklace. 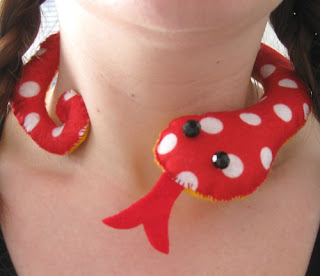 I dropped him off on the stairs to visit a friend! 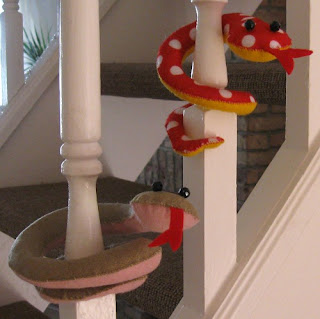 How did your schnake turn out? Is he as schneeky as mine?
Show me here: http://www.flickr.com/groups/sewingtuesday/ Things that make me happy.

Holly Dawes
United Kingdom
Hi! I'm Holly, I live in the UK with my partner Ben, daughter Belle and our Border Collie Hopper. I like to draw and stitch pretty/interesting/weird things. I always like to be learning something.